Thanks to those who donated their computers, specifically to my friends at Microsoft & HEABC, as well as Vicki for helping me lug all these computers in the back of our car. That 22 inch CRT monitor must be the heaviest monitor I’ve ever carried in my entire life.

We were able to donate 3 monitors, 3 computers, a fax machine & some other electronic odds & ends.

A shout out also to Mack Flavelle, Brian Yan Muk, & VanCityBuzz for retweeting on twitter!  Please contact me if you have more computers to donate after the boxing day – if we have enough interest we can rent a van and go around Vancouver to pickup everyone’s computers!

Since I’m going anyways, I’m more than willing to pick up any donations on the way! 🙂 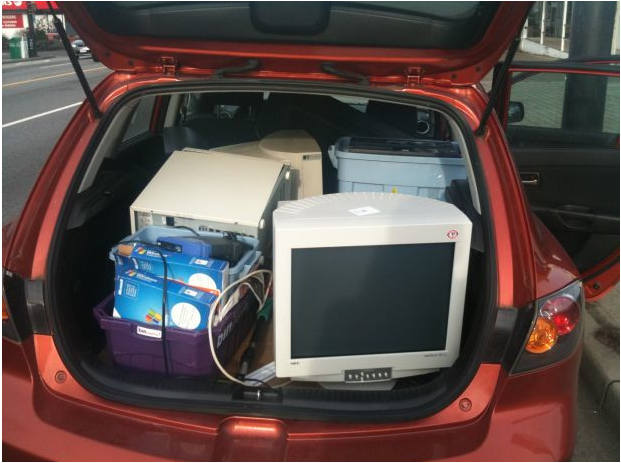 Why are you doing this?

What Can I Donate?

Here’s a map of my route. If you’re a geek, you can add your location with the “edit” function. Otherwise, just call me @ (778)241-CHUI, leave a comment on this entry, or tweet me @jonchui

I’ve chatted with Free Geek and they’re open to doing this again later, but with their big van. So if you still have donations, but can’t get them by today @ 1:30 pm, just leave a comment so we know for next time!

“If you’re not passionate about something you can’t possibly be successful in it.” – Mike Desjardins (CEO of VIRTUS)

18 year old Vancouverite Brian Wong embodies this quote. As the co-founder of FollowFormation.com, a tool that helps twitter “noobs” follow the top users in the category of their choice, Brian Wong has traditionally stayed “under the radar” and allowed his products to take the spotlight. Now, as he’s admitted to me, that’s about to change.

I caught up with him at downtown Coal Harbour for a quick interview on what he’s up to. When I say “caught” I mean it in the literal sense as we’ve been playing email tag for the good half of this year. Earlier this week, I finally got to sit down with him & he, being the A.D.D energetic wizard kid he is, initiated my first walking interview:

Anyone that has met Brian in person knows that he’s passionate about what he does. That, and he loves talking. Take a look at followformation.com, his design company aer marketing, or his recent slide presentation at Mini Enterprize and you’ll see the perfect blend of aesthetic appeal & quality content.

When I asked him where he learned all his design skills, he said they were “self-taught.” The simplicity and elegance of his design style rivals many top designing companies I know and yet he taught himself! He’s obviously got some natural skill & talent. Imagine if even a fraction of students discovered that unchartered territory of where their passions meet their skills and build those skills!

However, Brian would also argue emphatically that he worked his butt off to get where he’s at. I wouldn’t agree more. Lucas Lemanowicz, his now co-founder who started off as a developer for Aer, tells me of the time Brian got the idea for FollowFormation:

These stories and more abound in Brian’s life. He’s also known for his sporadic sleeping pattern, which you can ask him about yourself.

However, it’s not just hard work & crazy sleeping that brought Brian to where he is. It’s the fact that he actually went out and did it. He didn’t talk about it, complain about how hard the economy is, or whine about how his previous employees didn’t give him the freedom to create. He went out and made his own company and did all those things.

That’s the pattern I’m seeing over and over in interviewing successful entrepreneurs. When everyone else was talking about it, they went out and did it.

When I probed him further about his lack of personal online presence, he admitted:

“People are telling me I’m hoarding all this information but that’s not it at all. I spend time making presence for the things I do. My actions matter, not my thoughts.” – Brian Wong

Those words speaks highly of the maturity that has led to his current success. Brian has mastered at 18 years what many people still have trouble mastering @ 40.

Connecting with people that matter: Not Just Hard Work but Smart Work

In addition to Kevin Rose, founder of Digg, Brian has been traveling the globe connecting with influential people like Gary Vaynerchuk & the team behind RetailMeNot & BugMeNot. To him, they are “people that matter.” That’s his advice. To connect with the people that matter to you.

But he doesn’t like telling people who he’s met with because they get so focused on those people, they’re missing the point. It’s not the names of these “celebrities” he’s connect with, but rather how he made those connections.

As a quick story to end off, Brian talks about how he started to build his worldwide network & got connected with Kevin Rose. FollowFormation had just made some big news through Mashable and other similar sites and Brian phoned the worldwide Twitter conference in LA, told him he was a poor student, and asked if there was any solution. The receptionist replied that only speakers get in for free. He then asked to be a speaker. The rest is, as they say, history!

As Brian heads off to San Fran to work for Digg, I’ve asked him if he plans on coming back.

“Of course! Vancouver is my home! I won’t forget her!”

I’ll end off with a quote from Guy Kawasaki. Brian chatted with him in LA & Guy told him this:

“Focus on making meaning & the money will come.” – Guy Kawasaki

END_OF_DOCUMENT_TOKEN_TO_BE_REPLACED

For those who don’t know, my current passion revolves around revolutionizing Vancouver’s startup scene by getting more students passionate & adding real value to the World. This starts by bridging the gap between student entrepreneurship clubs on the same campuses as well as across campuses.

We hosted four first event this past Sunday to gather the champions, heroes & presidents of the entrepreneurial clubs & organizations this past month called IC4Students – Innovation Camp for Students.

Many people have asked me how it went, so I thought I’d let the student leaders tell you themselves in less than 3o seconds:

UPDATE: check out the newest post for the full video