So to my surprise, our family was interrupted w/ a loud “Package for Jonathan Chui!” through our front door @ 9:30 AM this morning.

I had been following the UPS delivery status of my iPhone4 since Wed, when it left China, then hit Hong Kong & landed in Anchorage, Alaska.

The nice UPS delivery man told me I was the third person to receive it on his truck & that he had 40 others to deliver. One person even ordered 10 (i don’t know how that’s possible, but whatever). I was so happy I took his picture:

One of the first things I tried to use was Siri, the famous voice assistant and 1 of 3 reasons to get the 4s (the other two being an A5 processor, 8 MP camera with 5 “amazing” lenses – I’ll talk about them in another post).

I was surprised when I held down the Home button, just like the demo, and I got the regular old Voice Control!! I searched “Siri not in Canada” & found this link from Gary Ng on iPhoneInCanada, which had suggestions from people who had spoken w/ apple PR reps who said it wouldn’t be available.

Let me dispel all rumors & myths & say, it definitely works in Canada. However, not by default: you have to enable it in Settings, under General & Siri: 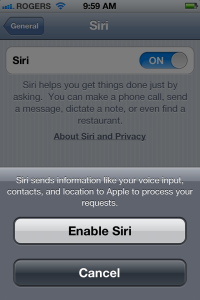 Furthemore, some features in US don’t work in Canada (more later). 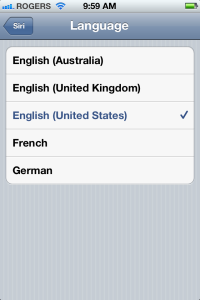 So how well does it work? Well, for the most part, okay.

My first attempt to send a text message to Vicki went something like this: 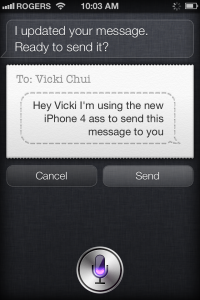 Hmm…. interesting that it doesn’t know it’s own name is in fact “iPhone 4S” not “iPhone Ass”.

Other than that, I asked it what time it was, to call/txt people, to set reminders & alarms, and finally to check Apple’s stock prices, etc. All the usual stuff. It’s probably the best Voice Recognition software I’ve used so far (compared to Dragon Dictation iPhone app & the windows tablet speech recognition stuff)

In general, it seems to give funny/vague/witty answers to some specific questions:

Me: “What’s the meaning of life”
Siri: “I don’t know, but i think there’s an app for that”

Cons:
– When I asked it “what good movies are out”, i got the response:

“Sorry jonathan, I can’t look for places in Canada” – nuts.

“Sorry Jonathan, I can’t provide maps & directions in Canada” – really? even though I can open up maps & search that?

– However, when I asked it “show me directions to apple”, it actually opened up the maps app & directed me to apple! (i guess cause it’s not in Canada).
– “Read my emails” – simply tells you how many unread emails. it can’t read it yet.

– When I asked it to open an application, it said:

“I’d like to, Jonathan, but I’m not allowed to. Sorry about that” – polite, but doesn’t make it any more useful, haha.

Other cons: It doesn’t seem to read text messages automatically – you have to specifically ask “read my text messages”.

All in all – pretty fun. Will be playing with it more.